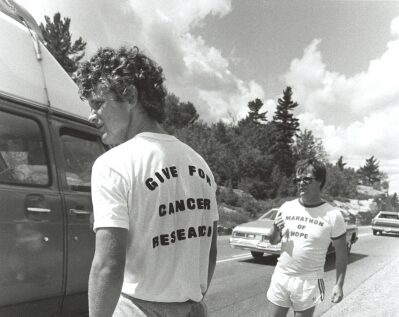 The first time I saw Terry Run was on a dark, lonely highway in rural New Brunswick at 4:30 in the morning. Although I had talked to Terry several times by phone, it was mid-June before we actually met.

I had flown overnight to Quebec City, driving on to Edmonston, New Brunswick where I knew Terry had finished the day before. I climbed into the back seat of my rental and caught a chilly two hours of sleep.At 4 a.m., I was awoken by the of the motel door opening and was met by three bleary eyed, very young men. “Hi, guys, I’m Bill Vigars”. A befuddled Doug Alward, Terry’s driver and best friend replied, somewhat confused, “You’re the guy from the Cancer Society?” I was not what they had expected. They had been dealing with more mature (in every sense of the word) individuals from the Cancer Society to that point.After a quick chat I jumped in the van with them and we drove off into the darkness. After about 10 minutes we stopped in the middle of nowhere on the Trans Canada highway. It was explained to me that the tiny white piece of plastic on the shoulder of the road was a shopping bag they had covered at the exact spot Terry had finished the day before. It was a routine that was repeated every morning of his odyssey.

Doug, Darrell and I drove off, parking exactly one mile down the highway. The only traffic on the road was huge transports, the rumble of their engines audible from a long distance. Out of the dark, in the rear view mirror of the van I saw this lonely figure coming towards us out of the dark.

The first thing I noticed was the look on his face. Calm, painful, determined, eyes focused ahead, at nothing. He stopped at the van for less than 30 seconds, a quick sip of water, then off into the dark again. Not a word was spoken.

I was awe struck. I could see the pain, the effort, the athletic strength -this kid had as he had already run over 1600 miles on that prosthetic leg. With 12 miles behind him we had time to chat during a breakfast break. Later, I watched as he headed off to his van for his morning break thinking to myself, by god, this kid is going to do this. He is going to make it all the way across Canada. He’s for real. It really is going to work.
In those four hours I became a believer. I was going to do whatever it took to help him make this happen.

I could hardly wait to tell the rest of Canada that Terry was on his way.