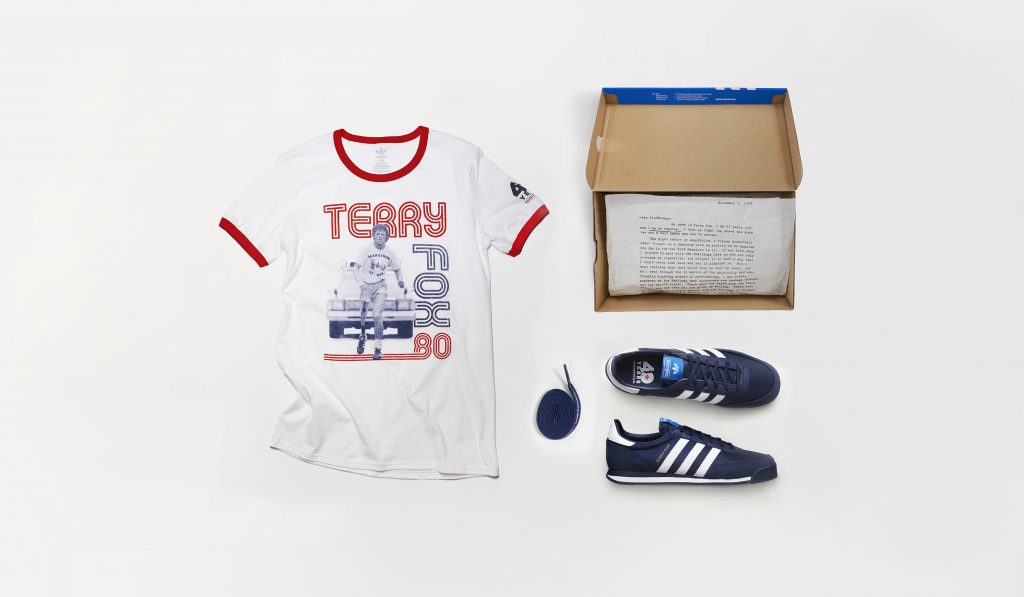 Toronto, August 30, 2021: Just in time for this year’s Terry Fox Run on September 19, adidas is restocking the highly sought-after commemorative collection from 2020, with all net proceeds benefiting The Terry Fox Foundation to support cancer research.

The collection will feature the Orion, the adidas shoe Terry wore throughout his run, along with the Ultraboost DNA and seven Terry Fox t-shirts. adidas believes that ‘through sport we have the power to change lives and there is no better example of that than Terry Fox.

“We’re honoured to continue to support Terry’s dream and work collaboratively with both the Fox Family and The Terry Fox Foundation,” said Stew Smith, Vice President of adidas Canada. “This year we’re bringing back our limited-edition collection including the shoe Terry wore during his Marathon of Hope, the Orion, with a call for all Canadians to celebrate Terry’s legacy.”

“It’s heart-warming to see so many Canadians continue to participate in the Terry Fox Run and raise funds for cancer research in Terry’s name,” said Fred Fox on behalf of the Terry Fox Family. “Seeing the adidas Orion shoe everywhere brings that nostalgia back, and reminds us there are miles to go to realize Terry’s dream of finding a cure.”

Every year, adidas is proud to support The Terry Fox Foundation through a variety of employee engagement and fundraising activities, including participating in the Terry Fox Fun in communities across the country.

The collection is available to all Canadians August 30, 2021 through adidas.ca/TerryFox. 100% of the net proceeds will be donated to The Terry Fox Foundation as part of adidas’ ongoing support of the organization.

The next Terry Fox Run will take place on September 19, 2021 and all Canadians are encouraged to participate from wherever they are, their way.

Registered run participants who secure five sponsors by September 1 will be entered into a draw for a chance to win a pair of limited-edition adidas Orion shoes.

About The Terry Fox Foundation

The Terry Fox Foundation honours the vision and spirit of an iconic Canadian while raising critical funds for cancer research. As a leading national charitable organization, the Terry Fox Foundation plays a vital role in building community, engaging more than 20,000 passionate volunteers and 3.3 million students in nearly 10,000 annual fundraising events across the country.

People around the world of all ages, backgrounds, and abilities have been inspired by Terry’s enduring legacy. Through the generous support of our donors, partners, and volunteers, The Terry Fox Foundation has raised more than $850 million and funded 1,300 innovative cancer research projects, bringing hope and health to millions of Canadians. Visit terryfox.org for more information and to learn how you can help take Terry’s Marathon of Hope across the finish line.

adidas is a global leader in the sporting goods industry with the core brands adidas and Reebok. Headquartered in Herzogenaurach/Germany, the company employs 57,000 people across the globe.

For the first time since 2019, the Terry Fox Run returns in person to nearly 600 communities across Canada on September 18

Terry Fox: The Power of One Broadcast Benefit to Celebrate Canadian Icon and Support Cancer Research