Home / Stories of Hope / More Memories / It started with my dad… 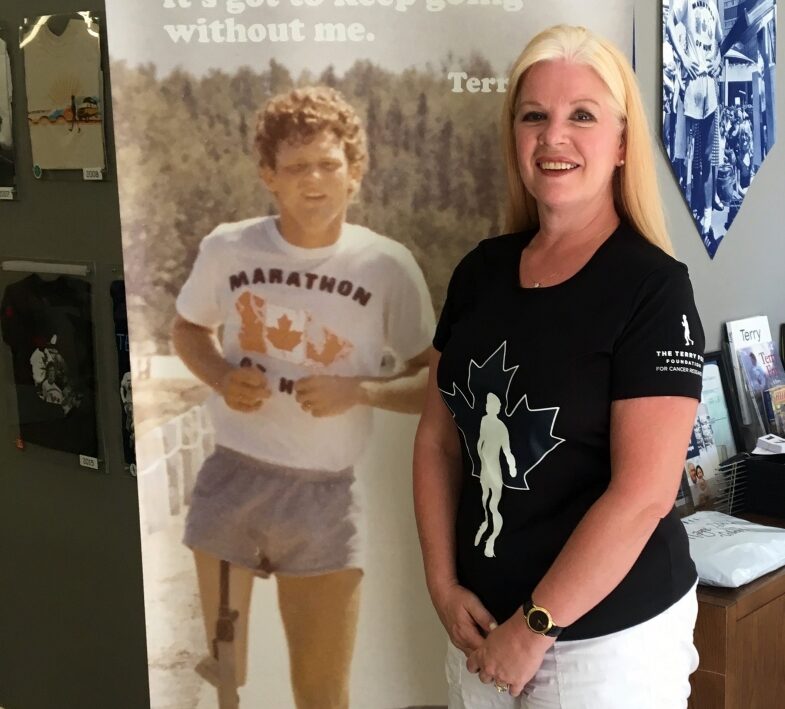 It started with my Dad. He worked road construction in an area where Terry Fox was training for his epic journey. My Dad would come home and tell us about this crazy kid he would see running up the backside of this mountain, on one leg. One particularly miserable day, my Dad stopped and offered Terry a ride. Terry’s reply was “No thank you. This is what I do.” My Dad shook his head and drove off wondering why and thinking this kid was a little nuts. April 12, 1980 arrived and he soon learned why when the news was now sharing the story of a freckled face young man, from a small place called Port Coquitlam, who had set out to run across Canada to raise much needed funds for cancer research. My Dad now understood.

As a family, we sat nightly in front of our television set and from the comfort of our living room, we watched Terry, with the firm determination on his face, run one-step at a time. He was running with such purpose and so from our living room, we cheered him on, anxiously awaiting his arrival at some point home to British Columbia and the end of his Marathon of Hope.

It was an amazing thing to watch nightly and read the stories that were being shared. My Dad was an avid reader of the Vancouver Sun Newspaper and would often share coverage in the paper with us. I loved to see Terry run and I loved the interviews with the people who had actually seen him running and to hear how that experience had affected them. It affected me, and more so that I could ever imagine.

We all watched in shock and sorrow the day his Marathon of Hope came to an end outside of Thunder Bay. Like all Canadians, we knew that if Terry could get back out there, he most certainly would.

A telethon was organized to raise money for his dream and we watched again as a family the many performers who came out and saw the total grow and grow to a staggering $10 million plus dollars…all for Terry…all for his dream to see the hurting stop.

The day Terry lost his battle is a day I have never forgotten. I clearly remember my Mom coming in to my room that morning and telling me that Terry was gone. It was a day of mourning for all of Canada. I still have that original Vancouver Sun newspaper from the day he passed. It was just one of a few things I hung on to growing up.

Never in my darkest thoughts did I think that what I had witnessed on our television set in 1980 would have such a profound effect on me. When I graduated high school the year after Terry passed away, I was asked for my annual, who was my hero. That was easy. Terry Fox. 17 years later, I would truly understand what Terry had set out to do. In 1999, I was diagnosed with stage three breast cancer. My niece, who was only six years old at the time and had recently learned of Terry in school, asked if I was going to die, like the boy without the leg. I knew that because of Terry, I had a very real chance of surviving, because of the funds he had helped to raise and that his legacy continues to raise. I underwent several surgeries, chemotherapy and radiation treatments and next month I will celebrate being 19 years cancer free. Because of Terry. Because of his Marathon of Hope. Because of everyone that comes out and participates in a Terry Fox Run. Because of those that continue to believe in his dream and give to cancer research. I live and breathe today because of Terry’s dream and I am honored and privileged to give back by working for the Foundation that bears his name.